Vast areas around Humansdorp, Hankey, Patensie, Thornhill and Kareedouw coastal areas in the province are characterized by the large amount of wattle and eucalyptus trees.

These trees grow as aggressive invader species meaning that they take over from existing vegetation and are dominant to our indigenous plants and trees; they are required by law to be eradicated over time. These trees are alien invader species and projects such as Working for Water have been set up by the state to attempt to eradicate the species in and around water courses and rivers, the commitment by the IPP’s is to collaborate with these teams to remove the invader species. These invasive species cause billions of rands of damage annually to South Africa’s economy through the negative impact on water resources and biodiversity.

The Bio-Mass Project managed by ABI Africa is a single year program completed over two phases, however the funding for the clearing of the vegetation through the Department of Environmental Affairs Natural Resource Management Programme will continue for three years and ABI Africa’s involvement includes the following:

There are five harvesting teams in the Humansdorp node. Each team consist of: 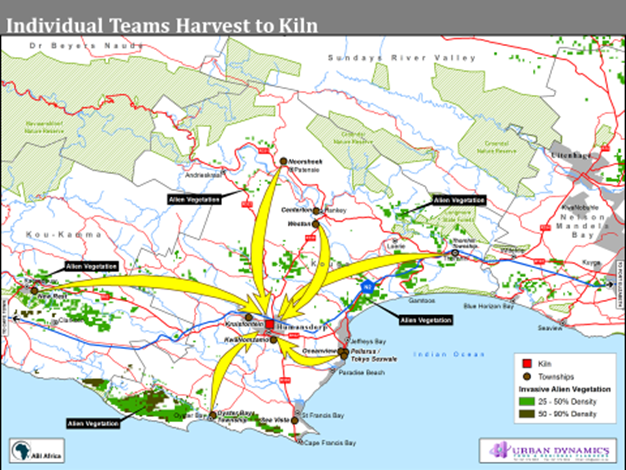